So, you may already be aware, this year has been my introduction to competitive marching band.  As my children were never into competitive sports, I was completely unprepared for the commitment required by both my man child & myself.

As I entered this brave new world, I was introduced to a lot of parents that love being a part of band as much or maybe more than their children.  It seemed like all in or nothing at first. There was little doubt that I would not become an ‘all-in’ person.  (One might gather that from my ability to create a blog post in the middle of the afternoon instead of watching the 13 bands performing after ours). I spent a little too much time focusing initially on the imposition band was causing in my life and not enough time being grateful that my boy found something he really enjoys doing. I will admit, my man child actually asked me if I needed to complain about band all the time during those first few weeks of practice before school started.  (ouch)

So, here I am in a hotel room in Atlanta.  It is currently 45 degrees outside with 28mph winds.  I purposely booked a hotel close to the Georgia Dome so I could walk there.  That seemed like such a great idea until the weather had its say.  When I walked over it was 41 degrees & the wind literally blew coffee out of my cup (with a lid on it) onto my jacket as well as my person (yes, the wind literally moved me & not in a good way). 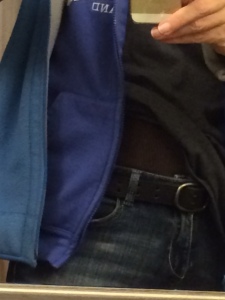 I am utterly unprepared for cold weather. I am grateful I found the big outer fleece which I wore over a zip up hoodie, over an XL band t-shirt (procrastinatiors make do with whatever sizes they have left) over a thermal (perhaps fake thermal) shirt.  None of these things helped lesson the brutal cold that short walk produced.

Yes, I was the normal head sized person with a HUGE midsection walking to the Georgia Dome today, (maybe it made my legs look skinnier…hmmm).

So I went to watch the preliminary performance.  I was able to watch 3 or 4 bands before ours were scheduled to perform.  When I saw my boy over in the corner with his pit equipment watching a huge band perform right before them, I literally realized that I need to seriously get over myself.

I was so proud of him and all the other kids in the band.  The hours upon hours of work they put into it really says something about their dedication, love of music and band.

When they began setting up, I realized I was more nervous than they were.  They all know exactly what they need to do, where they need to be.  My sons eyes on the drum major.  I wanted to yell at him so he could see me, but didn’t.  His concentration & focus was pretty amazing.

So, regardless of the standings after the rest of the bands perform, I am slowly gaining a lot of appreciation for this band thing.  Not sure I will ever be at the level of some of the parents but I am my man childs #1 fan mom.

Just for reference — I am taking a cab back to the Georgia Dome for the finals (even though it is 3 1/2 blocks away, 1 walking round trip in this weather is sufficient)

I have quite a few pictures, but I am not comfortable posting other people’s children.  I almost posted one which was not close up of anyone, but decided it was better not to.  Sorry